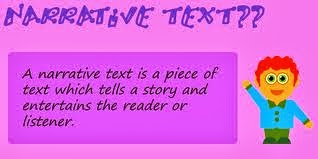 GENERIC Structure
1. Orientation
is about the opening paragraph where the character of
the story are introduced
2.Complication
where  the problems in the storydeveloped
3. Resolution
Where the problem in the story is solved

The legend Og banyuwangi
Once upon a time, there was a local ruler named King Sulahkromo. The king had a Prime Minister named Raden Sidopekso. The Prime Minister had a wife named Sri Tanjung. She was so beautiful that the king wanted her to be his wife.

The river immediately became clean and began to spread a wonderful fragrance. Sidopekso said, "Banyu...Wangi... Banyuwangi". This means "fragrant water". Banyuwangi was born from the proof of noble and sacred love.